Ayasofya (Haghia Sophia) Museum Hagia Sophia is the one of the most visited museums and most prominent monuments in the world in terms of art and the history of architecture. It has also been called “the eighth wonder of the world” by East Roman Philon as far back as the 6th century. The current Hagia Sophia is the third construction, done in a different architectural style, even though it occupies the same location as the previous two. 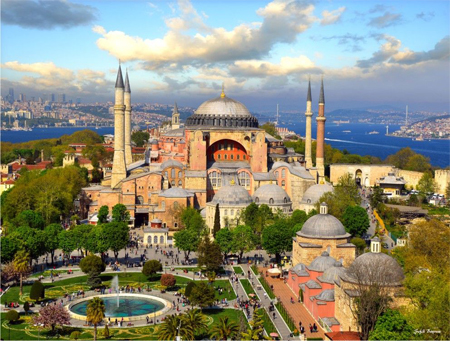 The original building was constructed by the most important architects of the period (527-565), Anthemios (Tralles) and Isidoros (Miletus), under the order of Emperor Justinianos. It is mentioned in the resources that during its construction period, the two prominent architects each had 100 architects working under them, who in turn had 100 workers each working under them.It was used as a church for 916 years but, following the conquest of Istanbul by Fatih Sultan Mehmed, the Hagia Sophia was converted into mosque. Afterwards, it was used as a mosque for 482 years. Under the order of Atatürk and the decision of the Council of Ministers, Hagia Sophia was converted into a museum in 1935. Hagia Sophia is open for visit every day. The winter visiting hours for the Hagia Sophia are from 09.00 to 17.00, with the final entry being at 16.00. During the summer, the visiting hours are between 09.00 and 19.00, with the final entry being at 18.00. 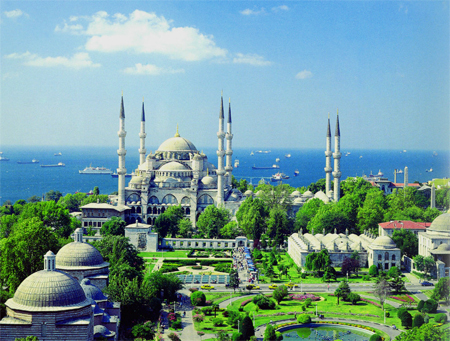 The Sultan Ahmed Mosque is a historic mosque located in Istanbul, Turkey. A popular tourist site, the Sultan Ahmed Mosque continues to function as a mosque today; men still kneel in prayer on the mosque's lush red carpet after the call to prayer. The Blue Mosque, as it is popularly known, was constructed between 1609 and 1616 during the rule of Ahmed I. Its Külliye contains Ahmed's tomb, a madrasah and a hospice. Hand-painted blue tiles adorn the mosque’s interior walls, and at night the mosque is bathed in blue as lights frame the mosque’s five main domes, six minarets and eight secondary domes. Sultan Ahmet Camii (Blue Mosque) is still a working mosque, and is therefore closed to tourists during prayer time. In general, the opening hours of the Blue Mosque Turkey are from 08:300 am until one hour before dusk each day, excluding 90 minutes each prayer time, and two hours during Friday noon prayers. 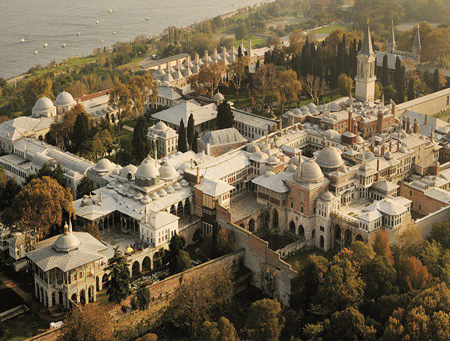 Construction began in 1459, ordered by Mehmed the Conqueror, six years after the conquest of Constantinople. The complex was expanded over the centuries, with major renovations after the 1509 earthquake and the 1665 fire. The palace complex consists of four main courtyards and many smaller buildings. Female members of the Sultan's family lived in the harem, and leading state officials, including the Grand vizier, held meetings in the Imperial Council building. After the 17th century, Topkapı gradually lost its importance. The sultans of that period preferred to spend more time in their new palaces along the Bosphorus. In 1856, Sultan Abdulmejid I decided to move the court to the newly built Dolmabahçe Palace. Topkapı retained some of its functions including the imperial treasury, library and mint. Following the end of the Ottoman Empire in 1923, Topkapı was transformed into a museum by a government decree dated April 3, 1924. The palace complex has hundreds of rooms and chambers, but only the most important are accessible to the public today, including the Ottoman imperial harem and the treasury, called hazine where the Spoonmaker's Diamond and Topkapi Dagger are on display. The museum collection also includes Ottoman clothing, weapons, armor, miniatures, religious relics, and illuminated manuscripts like the Topkapi manuscript. The complex is guarded by officials of the ministry as well as armed guards of the Turkish military. Topkapı Palace is part the Historic Areas of Istanbul, a group of sites in Istanbul that were added to the UNESCO World Heritage Site in 1985. Museum is open everyday except Tuesdays. The winter visiting hours for the Topkapi Palace are from 09.00 to 16.45, with the final entry being at 16.00. During the summer, the visiting hours are between 09.00 and 18.45, with the final entry being at 18.00. 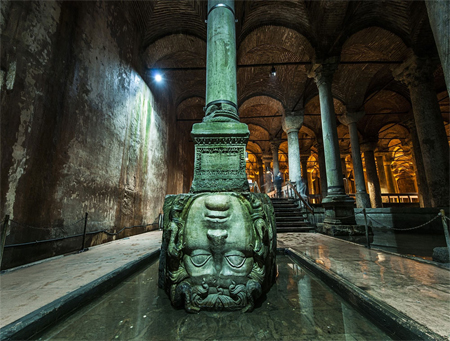 One of Istanbul's splendid historical buildings is the Basilica Cistern located in the southwest of Hagia Sophia. This large underground cistern built by Byzantine Emperor Justinian I (527-565) was named as arasında Yerebatan Palace ere among the people due to the marble columns rising from the water and countless seemingly like. It is also known as Basilica Cistern since there is a Basilica in the place where the cistern is located. Except couple of the edged and grooved columns of the cistern, majority of them are shaped as a cylinder. Two Medusa heads, which are used as supports under the two columns at the northwest edge of the cistern, are the great work of art from the Roman period. What attracts most attention from the visitors is that the structure from which the Medusa heads have been taken is unknown. The researchers often consider that it has been brought for being used as supports to the column at the time of construction of the cistern. However, this has not prevented myths for the heads of Medusa. Museum is open seven days a week. Exceptionally, the first day of religious holidays is opened at 13.00. 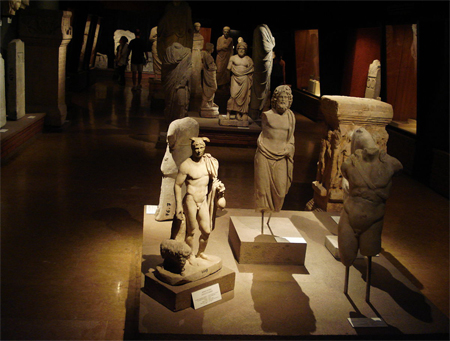 The Istanbul Archaeological Museums is among the most impressive historical venues for your outdoor events and made up of three main units: the Istanbul Archaeological Musuems, the Ancient Orient Museum and Tiled Kiosk Museum. The collection of the Archaeology Museum Turkey’s first museum houses over one million artifacts belonging various cultures collected from the imperial territories. The Archaeological Museum was ounded in June 13, 1891 under the name of Müze-i Hümayun (the Imperial Museum). Commissioned by archeologist, painter and curator. Museum is open everyday except mondays. The winter visiting hours for the museum are from 09.00 to 16.45, with the final entry being at 16.00. During the summer, the visiting hours are between 09.00 and 18.45, with the final entry being at 18.00. 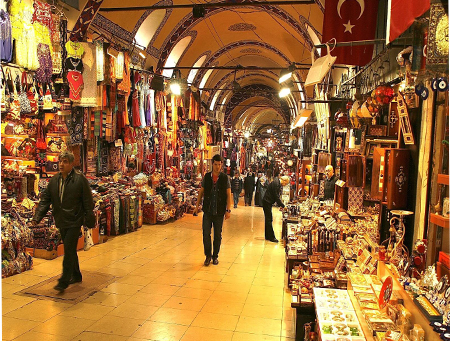 The Grand Bazaar (Kapalıçarşı) in Istanbul is one of the largest and oldest covered markets in the world, with 61 covered streets and over 4,000 shops which attract between 250,000 and 400,000 visitors daily. In 2014, it was listed No.1 among the world's most-visited tourist attractions with 91,250,000 annual visitors. The Grand Bazar at Istanbul is often regarded as one of the first shopping malls of the world. 09:00 - 19:00 every day except on Sundays and during public or religious Holidays 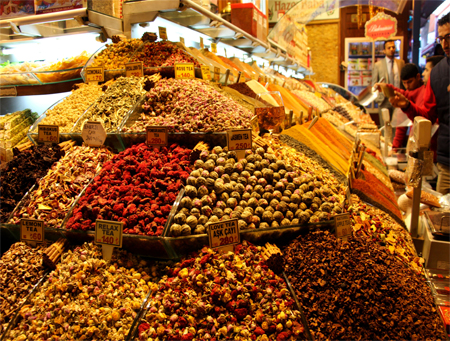 The Spice Bazaar, Turkey is one of the largest bazaars in the city. Located in the Eminönü quarter of the Fatih district, it is the most famous covered shopping complex after the Grand Bazaar. There are several documents suggesting the name of the bazaar was first "New Bazaar". The building was endowed to the foundation of the New Mosque, and got its name "Egyptian Bazaar" (Turkish: Mısır Çarşısı) because it was built with the revenues from the Ottoman eyalet of Egypt in 1660. The word mısır has a double meaning in Turkish: "Egypt" and "maize". This is why sometimes the name is wrongly translated as "Corn Bazaar". The bazaar was (and still is) the center for spice trade in Istanbul, but in the last years more and more shops of other type are replacing the spice shops. The building itself is part of the külliye (complex) of the New Mosque. The revenues obtained from the rented shops inside the bazaar building were used for the upkeeping of the mosque. The Spice Bazaar is open daily 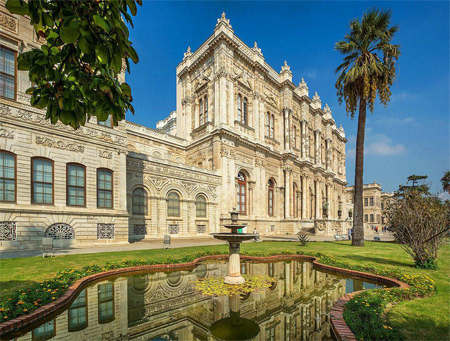 Dolmabahçe Palace was ordered by the Empire's 31st Sultan, Abdülmecid I, and built between the years 1843 and 1856. Previously, the Sultan and his family had lived at the Topkapı Palace, but as the medieval Topkapı was lacking in contemporary style, luxury, and comfort, as compared to the palaces of the European monarchs, Abdülmecid decided to build a new modern palace near the site of the former Beşiktaş Sahil Palace, which was demolished. The palace was home to six Sultans from 1856, when it was first inhabited, up until the abolition of the Caliphate in 1924: The last royal to live here was Caliph Abdülmecid Efendi. A law that went into effect on March 3, 1924 transferred the ownership of the palace to the national heritage of the new Turkish Republic. Mustafa Kemal Atatürk, the founder and first President of the Republic of Turkey, used the palace as a presidential residence during the summers and enacted some of his most important works here. Atatürk spent the last days of his medical treatment in this palace, where he died on November 10, 1938. Museum is open 9.00-16.00 every day except Mondays. Exceptionally, the first day of religious holidays is opened at 13.00. 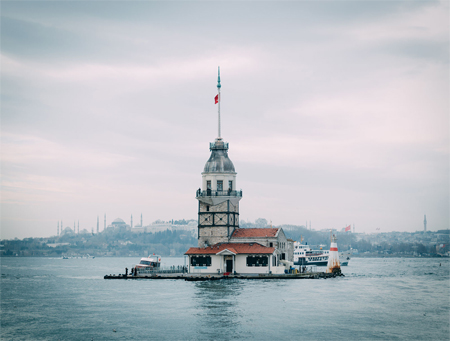 The Maiden’s Tower is located 150-200 meters off the shore of the Salacak district in Üsküdar. Although it is not definite as to when the Maiden’s Tower was built, the tower’s architectural style is said by some sources to be from around 340 BCE. Previous names of the Maiden’s Tower were Damalis and Leandros. Damalis is the name of the wife of the king of Athens,Kharis. When Damalis died, she was buried on the shore, and the name Damalis was given to the Tower. It was also known during Byzantine times as "arcla" which means "a little castle." The Maiden’s Tower has been used for many different purposes over time, such as a tax collection area from merchantman, a defense tower, and a lighthouse. Maiden’s Tower opens after faithful restoration at 2000, tower transformed into a popular café and restaurant, with an excellent view of the former Roman, Byzantine and Ottoman capital. Private boats make trips to the tower several times a day. Maiden's Tower is open between 9.00-00.30 every day

The tower was built in the 14th century by the Genoese who had semi-independence from the Byzantines. It was part of their fortification. The tower was used as a prison and a fire tower during the Ottoman era. The nine-story tower is 66.90 meters tall and was the city’s tallest structure when it was built. The elevation at ground level is 35 meters above sea-level. According to Evliya Çelebi, Ottoman historian and traveller, Hezarfen Ahmet Çelebi flew as an early aviator using artificial wings from the tower to Üsküdar. The Sultan at the time initially taught of rewarding him, then changed his mind and sent him to exile in Algeria. Today the observatory deck has a 360 degrees view of the city, from here you can observe the monuments that sit on the seven hills of historical peninsula. (Constantinople was built on the seven hills of the historical peninsula like Rome.) Tower is open seven days a week between 09:00 and 19:00. 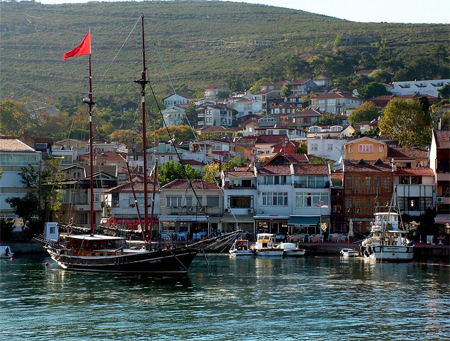 The Princes' Islands are composed of nine islands off the Asian coast of Istanbul, in the Sea of Marmara. There are regular passenger ferries and fast passenger ferries (sea bus) to the four of the islands from Kabatas and from Bostanci districts. Motor vehicles are not permitted on the islands except the ones belonging to local municipality for public works, so people walk or rent a bicycle or horse-drawn carriage, even a donkey. These are nice little islands where local people have their summer homes or go there for small beaches and for picnicking, or just to wonder around at the weekends. These four islands are known as Adalar (Islands) in general in Turkish and their names are Buyukada, Heybeliada, Burgazada, and Kinaliada. There is also Sedefadasi which is not very popular as the other ones and very small settlement on it. There are no settlements on Hayirsizada, Sivriada and Yassiada, and Kasikada is a private island. The name of the islands come from the Byzantine period, when princes and empresses were exiled there. But during the Ottoman period, especially around 19th century with the use of steamboats, these islands became a popular resorts for Istanbul's rich people, building their wooden houses. Jewish, Greek and Armenian communities were a large part of the inhabitants of the islands. Today, the islands are popular tourist destinations for daily excursions especially during summer months. There are many monasteries and historic buildings on the islands, besides Victorian style old wooden mansions.